The King's Academy nationally acclaimed Theatre Company invites you to be our guest in our beautiful state-of the art Page Family Center for Performing Arts. 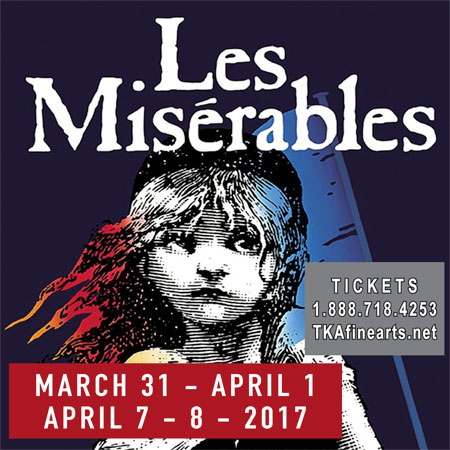 Tickets are currently available for purchase

Ticket Sales are Final and we are unable to do ticket exchanges.

Unfortunately due to delays in construction of the new Center for the Performing Arts, performances will be held in the M. Nelson Loveland Sports & Fine Arts Center.

Les Misérables is a sung-through musical based on the novel Les Misérables by French poet and novelist Victor Hugo. Premiering in Paris in 1980, it has music by Claude-Michel Schönberg and original French-language lyrics by Alain Boublil and Jean-Marc Natel, alongside an English-language libretto with accompanying English-language lyrics by Herbert Kretzmer. The London production has run continuously since October 1985 – the longest-running musical in the West End and the second longest-running musical in the world after The Fantasticks original Off-Broadway run.

Set in early 19th-century France, it is the story of Jean Valjean, a French peasant, and his quest for redemption after serving nineteen years in jail for having stolen a loaf of bread for his sister's starving child. Valjean decides to break his parole and start his life anew after a kindly bishop inspires him by a tremendous act of mercy, but he is relentlessly tracked down by a police inspector named Javert. Along the way, Valjean and a slew of characters are swept into a revolutionary period in France, where a group of young idealists make their last stand at a street barricade.

Ticket Sales are Final and we are unable to do ticket exchanges. 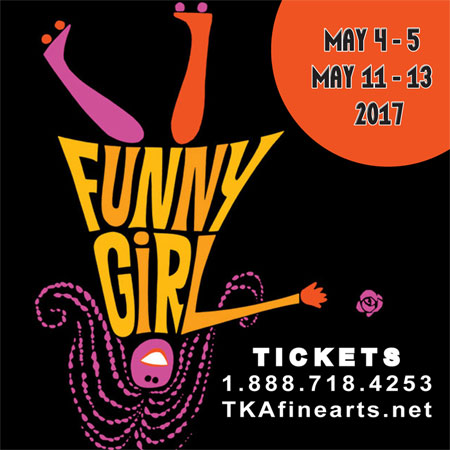 In the Ziegfeld Follies, in Hollywood films, and on the radio, Fanny Brice was one of the most celebrated entertainers of her time. With humor, talent, and chutzpah, young Fanny, an awkward Jewish girl who “isn’t pretty,” defies the odds and becomes one of the greatest stars of her generation. Her rise to super-stardom, and her turbulent romance with gambler Nick Arnstein, are explored through Bob Merrill and Jule Styne’s unforgettable score.

Backstage in her dressing room at the New Amsterdam Theatre, where she is a reigning Ziegfeld star, Fanny Brice sits thoughtfully at her dressing table. Her husband, Nick Arnstein, will soon come home after serving a prison sentence, and she must make a decision about their future. As she ponders her decision, the sights and sounds of her past come back to her.

We see Fanny as a stagestruck teenager on New York City’s Lower East Side. Awkward and unattractive, Fanny is fiercely determined to be a star. Her mother and a neighbor try to dissuade her from entering show business but Fanny persists and overwhelms a vaudeville hoofer with her unshakable self-confidence. The dancer, Eddy Ryan, coaches her in singing and dancing, and soon she is wowing vaudeville audiences.

Nick Arnstein, an elegant and well-dressed gentleman, visits Fanny’s dressing room after the show. Though she is clearly attracted to him, Fanny is interrupted by a telegram from producer Flo Ziegfeld, who offers her a spot in his current Follies. Fanny is a hit in her first Ziegfeld appearance and Nick celebrates with her at her mother’s opening-night block party on Henry Street. At the party, Nick and Fanny share their desires and vulnerabilities

Some months later, in Baltimore, Nick invites Fanny to a private dinner at an exclusive restaurant  and Fanny is smitten. At the railroad station where the Follies company plans to board a train for Chicago, Fanny decides to leave the company and join Nick on a train bound for New York. Seeing a chance for true happiness, she refuses to let anything stand in her way.

Fanny and Nick are married and move into a mansion on Long Island. During rehearsals of a new Follies, Nick approaches Ziegfeld backstage about investing money in a Florida gambling casino. Ziegfeld declines, but Fanny insists on putting up the necessary capital. When Nick’s casino venture fails, Fanny tries to treat the bad news lightly, but Nick becomes incensed. Out of desperation, he gets involved in a shady bond deal, and is soon arrested for embezzlement. Fanny, feeling helpless, nonetheless affirms her love for Nick.

The final scene returns to Fanny’s dressing room in the present. Nick, just out of prison, enters. While Nick and Fanny still love each other deeply, it is obvious that their marriage can only bring them unhappiness. So, reluctantly, they part. Alone once again, Fanny courageously resolves to get on with her life.

PAGE FAMILY CENTER FOR PERFORMING ARTS AT THE KING'S ACADEMY

Whether this is your first visit to The King's Academy Page Family Center for Performing Arts or your 20th, we want to ensure that you enjoy every moment. If you have any questions about the theatre accommodations or services, please review the information in the links below. If you have further questions not addressed here, feel free to contact us. We are always happy to hear from our patrons!
Directions
Box Office
Child Policy
Theatre Accessibility
Auditorium Guidelines